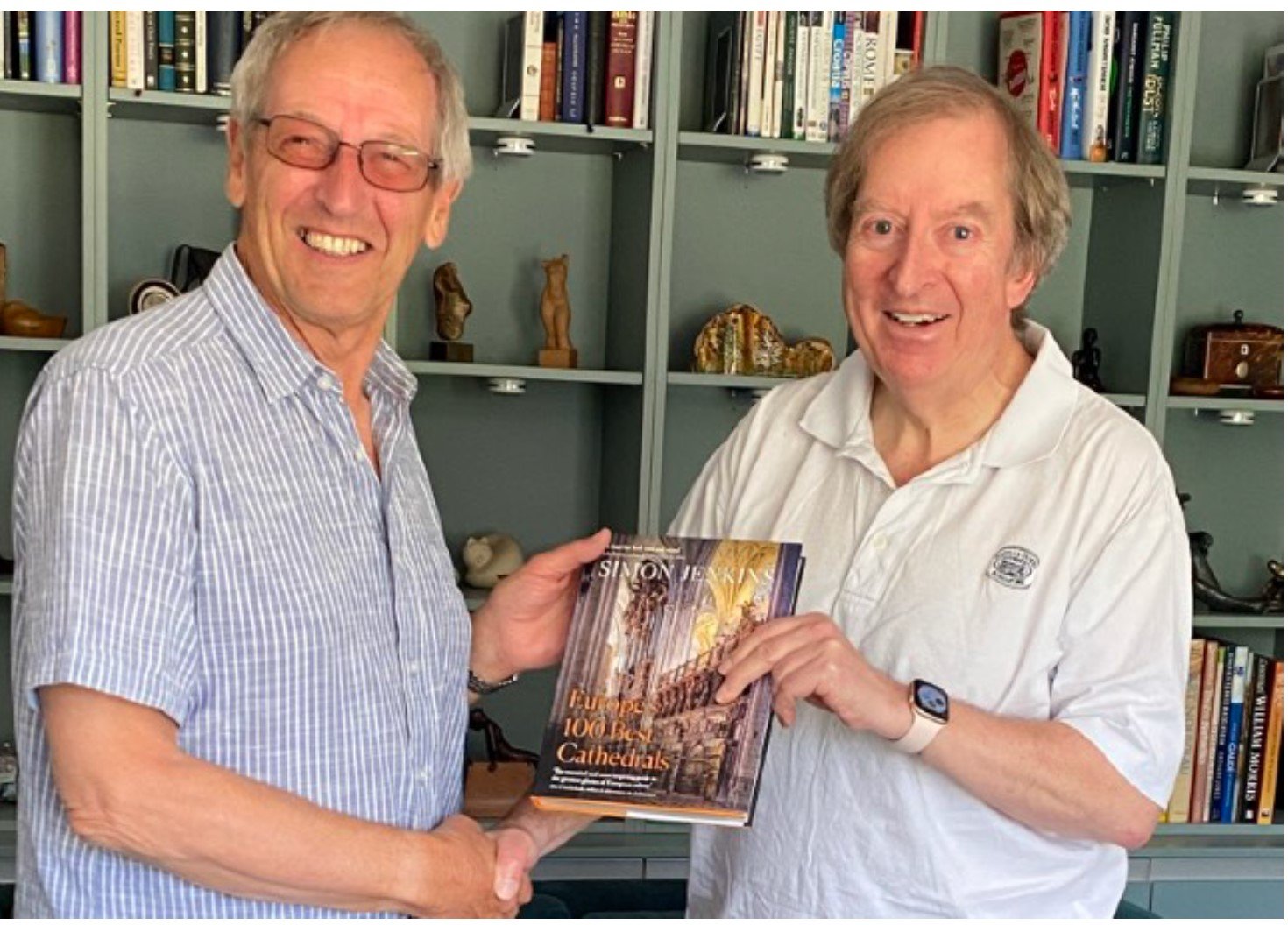 Chris Hawkings retired from the position of Trustee and Vice Chairman in April 2022 after many years of service to the Somerset Churches Trust. But, as Chris’ interest in churches and chapels is undiminished,
we wanted to give Chris encouragement to further explore (even further afield) with a token of our appreciation, this took the form of a copy of Simon Jenkins’ Europe’s 100 Best Cathedrals signed by fellow Trustees. As Chris said ‘This book is a wonderful momento of my time not just at SCT but during my career and on my travels! As for the cathedrals, whilst I have seen a few of them, a European Grand Tour could be in the offing!’

The Trust is very grateful that Chris will continue to volunteer by helping our Grants Secretary with Church Assessment visits from time to time.

This is a timely reminder of the immense value of volunteers to our charity. Please consider if you could assist us in a capacity which matches enthusiam and support for the maintenance and resilience of our churches and chapels in this historic county of Somerset. Make yourself known to us via the Contact Us page and we will be in touch very soon! 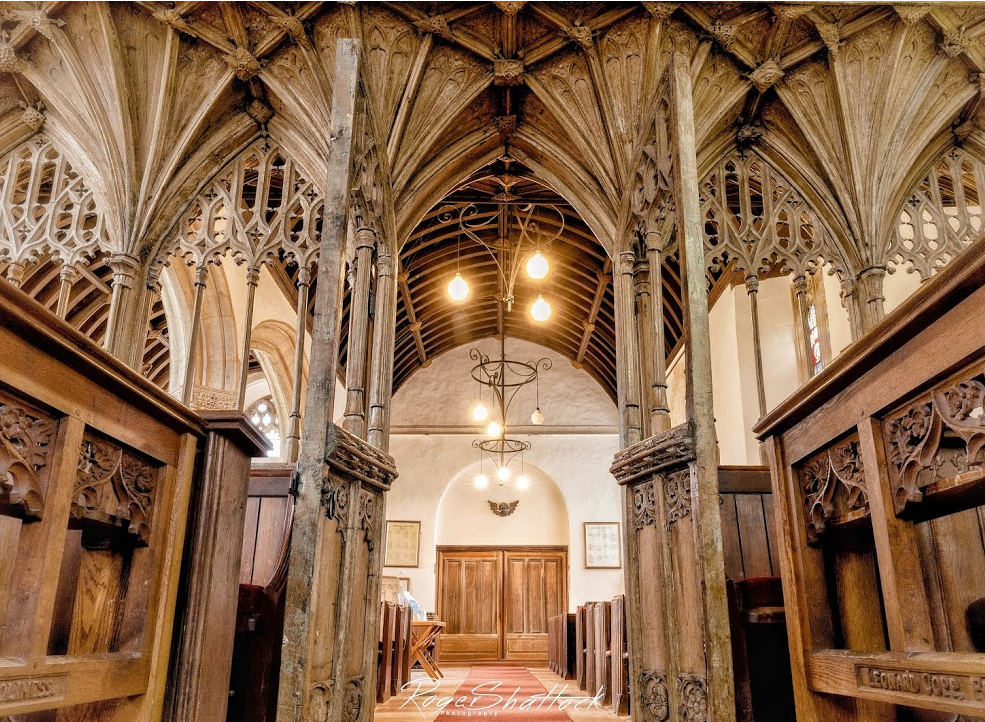 Trustees and Officers of the SCT are all volunteers and we are now looking for new volunteers to join in our work. We are interested in filling a number of key positions and welcome your expression of interest if you feel you might be willing and able to help.

Important areas concern overall Trust direction and strategy (Chair), Membership Secretary, Trust Secretary and a Trustee with Ride+Stride responsibilities. Ride+Stride is a key fundraising mechanism for the Trust and the ability to co-ordinate county wide is essential.

In general, enthusiasm and a passion for the continued existence and access to our historic churches and chapels is as important as any technical or professional skills which you may also possess.

If you are interested please do let us know via the Contact Us page and we will be in touch promptly. The next meeting of the Trustees is on June 28th and early expressions of interest will then be considered. We appreciate that volunteering can be burdensome but with a committed group who have the aims of the Trust at their heart, these roles can also be very rewarding.

We look forward to hearing from you! 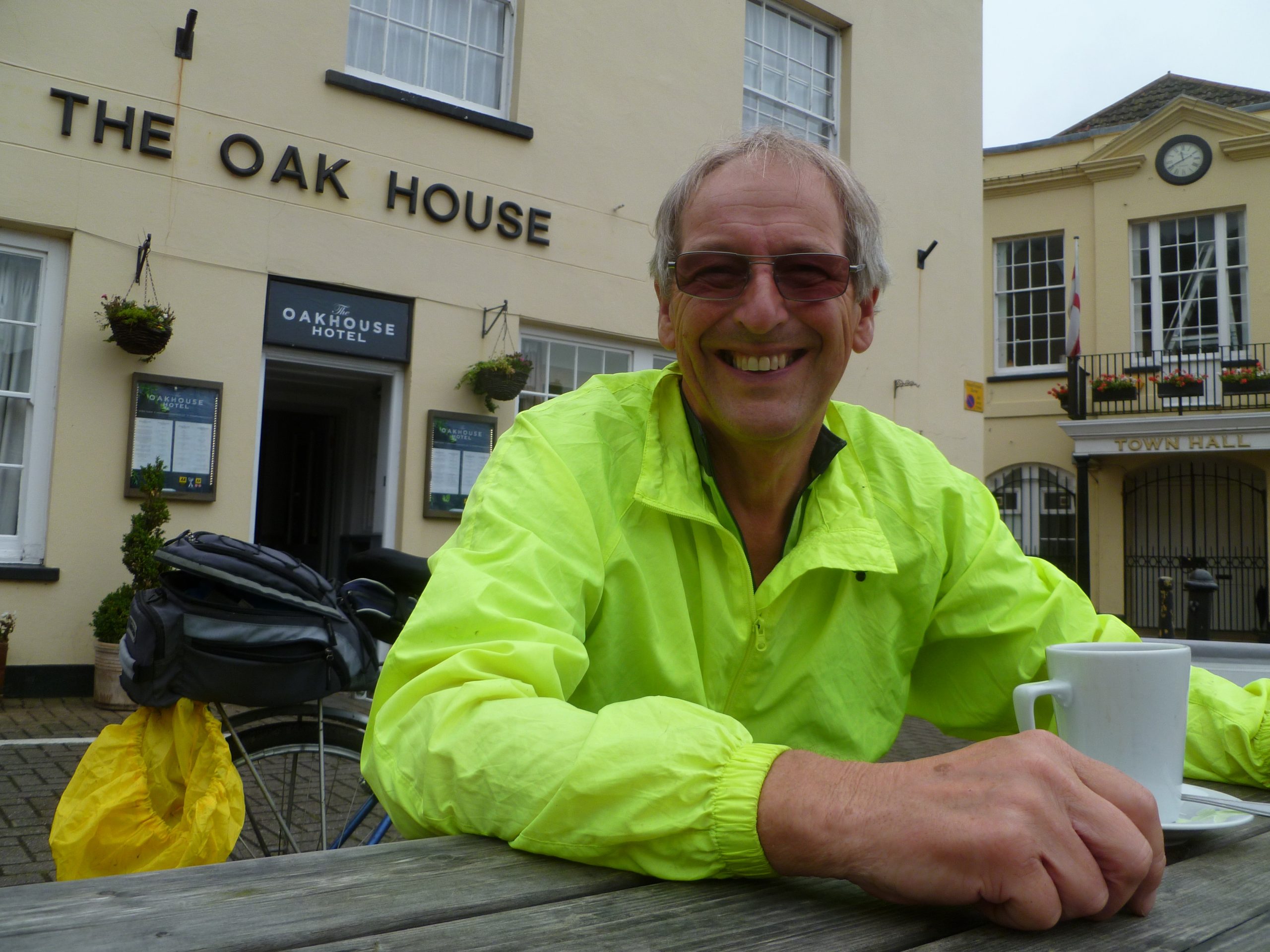 After many years of excellent service on 16th April 2022, Chris Hawkings will be relinquishing his role as a trustee and Vice Chairman of Somerset Churches Trust. Those involved with the trust during Chris’s tenure will appreciate that he has worked diligently and effectively to promote the trusts’ stated aims and objectives. Fellow trustees would like to express sincere gratitude to Chris for that dedication.

Chris will have served 11 years as a trustee and under the terms of the Trust Deed must stand down.  He has been involved with the trust since 2009 when, following his retirement from Ecclesiastical Insurance as a Senior Surveyor, he took up the role of Ride+Stride Organiser, at the suggestion of his wife Gill, who was Membership Secretary at the time. Chris held this position until 2017, during which time over £140,000 was raised for Churches in Somerset.

In 2017 Chris obtained a grant of £30,00 from Allchurches Trust allowing Somerset Churches Trust to make grants to 23 churches to help them install roof alarms following a huge upsurge in the theft of lead from our churches.

Chris says “It has been a great privilege to be involved with the trust and to play a small part in the preservation and improvement to widen the community use of our wonderful Somerset churches.”

New volunteers to help and support the work of the trust are most welcome to make themselves known and in the first instance, please make contact here

On a chilly autumn evening at the Wells Museum, the Somerset Churches Trust held its Annual Meeting followed by a lecture on the subject of Romanesque Churches in Somerset.  This was a particularly special opportunity for members and trustees to meet as no such meeting had been possible in 2020 owing to covid restrictions. This was well attended and members were brought up to date on the activities of the Trust over the last year. Thank you to everyone who attended and for the positive and helpful comments which were made.

The Annual Meeting was very well attended and the Newsletter compiled by Chair Axel Palmer is available to read here.

Treasurer Tony Davies reported on the trust’s finances. Click here to read the Annual Report and Accounts for the Year Ending 30 June 2021.

This provides a perfect opportunity to recognise that the trust was founded to meet specific issues – these are still with us and, with the world in a very different place, keeping ‘Somerset’s churches and chapels alive’ is a real challenge. After a quarter of a century and raising and distributing over £800,000, Somerset Churches Trust is even more relevant.

We will celebrate our past contributions and look forward to the next decades. Let us be educators, enlighteners and generous benefactors while at the same time having fun!